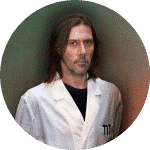 Imagicle communication: the daily challenge of designing the essential.

Brand design, Communication, Tone of Voice, Visual Identity
Technology warmed by a smile and the construction of the brand identity (that is, keeping your communication agency awake at night). Michele, art director of the michbold agency, tells how Imagicle's communication strategy was born and bred over the years.

A portrait of happiness.

It’s the evening of December 20, 2018. We are at the Christmas party in the new Imagicle headquarters in Massarosa, Italy: there are all of the 64 people working around Italy, Europe, Dubai, and the USA. They’ve been eating, drinking, playing and dancing for a few hours, immersed in the bright rooms of the large open space.
After a live jam session with covers ranging from U2 to Red Hot Chilli Peppers through operatic arias (sung by Francesca Cappelletti) three guys from the Dubai office take over the stereo and start a playlist of Arabic music that ends up engaging everyone in a collective and exciting dance amidst the desks.
I find myself immediately overwhelmed, and after a few minutes, when I stop to catch my breath, I am surprised to think how beautiful this collective force is, our feeling united – not because of easy mottos or corporate beliefs, but because of the real pleasure to be and do together. 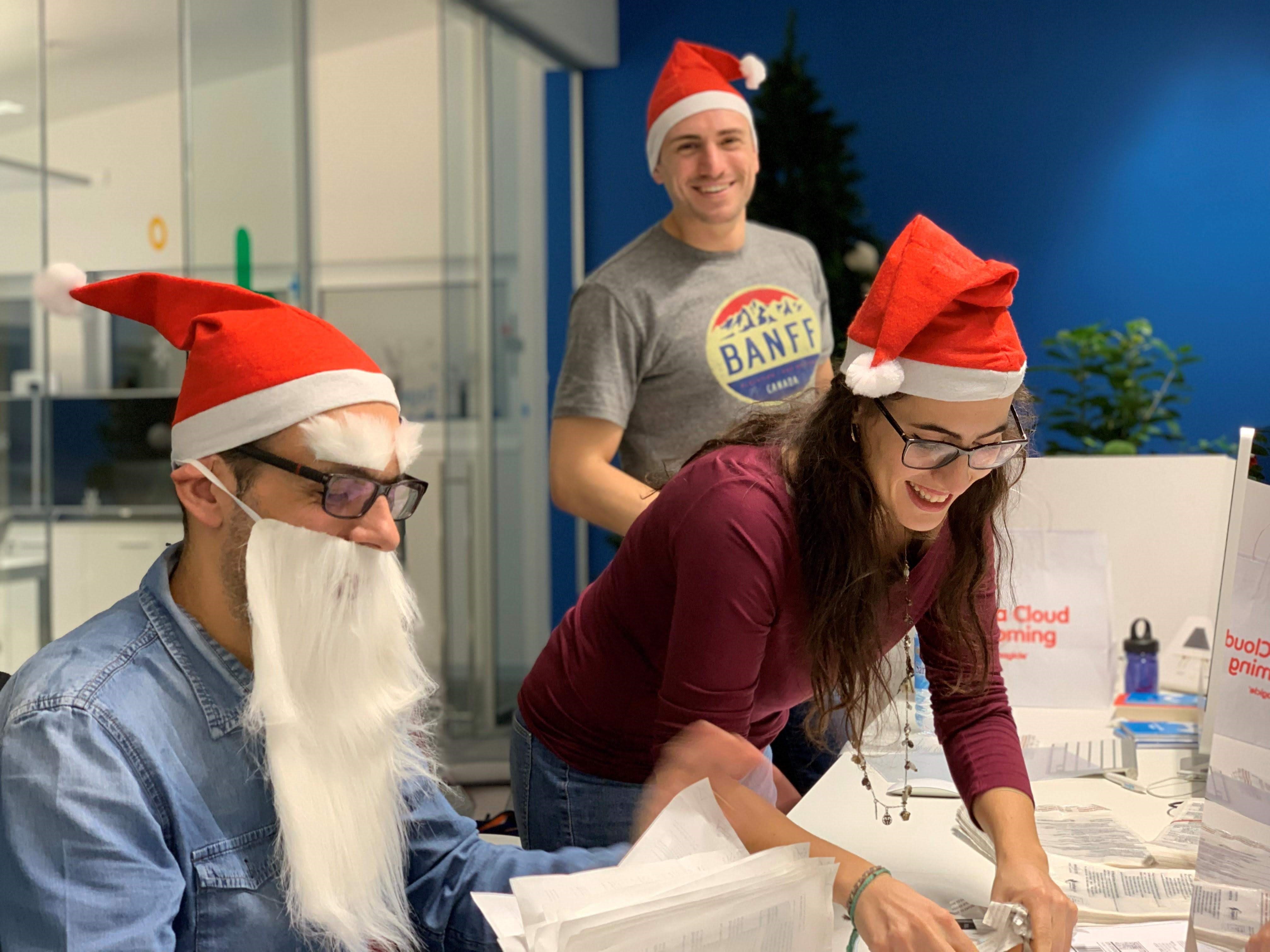 Where it all started.

It’s been almost ten years since the day Massimo Di Puccio (Imagicle co-CEO) involved us in elaborating the communication strategy for a new company about to spring from the merger of Telcen and StoneVoice. We would have to work hand-in-hand with a fast-growing marketing team and support it on the graphics side.
After several months of meetings and brainstorming, the name “Imagicle“ is born (by the other co-CEO, Christian Bongiovanni): a neologism where images, imagination, magic, and individuality intertwine – key of interpretation that we have tried to transpose in the brand and in the definition of the logo, with its verbalization in lower case to convey an informal and not vertical approach to the market and the offer.
At the same time, the idea of “Your communication easier” came out, Imagicle payoff since then as a clear, distinctive, challenging statement. Communicating such “ease”, indeed, has been and still is a complicated process.
Years of steady growth in double figures are also due to the great attention that Imagicle has dedicated to the communication project: in its early days (around 2011/2012), in a market not yet evolved in this direction, this has been a crucial factor of speedup and distinction from competitors (at the time we were actually surprised to observe the lack of attention paid to this matter by some prominent brands, which still had to fill the gap between the quality of products and services and an inadequate brand image).
We’ve always worked to build value around a company proposal made of high-quality solutions and support, and faster, brighter, simpler answers. “Faster, smarter, easier” has become a mantra that has permeated all communication and has been adopted as a corporate value, conveyed by a tone of voice that has been strengthened and refined over the years, but which, from the outset, has been the faithful representation of an informal concreteness (enriched by a touch of irony) characterizing Imagicle’s way of expression, both towards the market and towards his team.

The design has a golden rule: often the value lies in subtraction, not in addition. Not far from what the ancients used to call “labor limae”.
So, as a communication agency, first we had to focus on the Imagicle corporate image and refine it, then we had to start removing everything else. Less, less and even less.
There is no better way to convey a message than to distill it.
The institutional colors that were initially synthesized in the green-cyan gradient of the brand evolved in the current version: the shade has vanished, and only the cyan has been maintained, now identifying chromatism of the brand and the background of all communication.

This line includes the choice to build vector visuals with flat backgrounds for all representations: it’s a pretty flexible system that allows responding to all kind of design requests, from technical ones – connected to the description of the app features – to the more metaphorical ones, often of a more institutional nature. From an art direction point of view, these visuals adopt a codified compositional and chromatic system to emphasize the “family feeling” in different kinds of representation, that often have the human element as a pivot of storytelling. 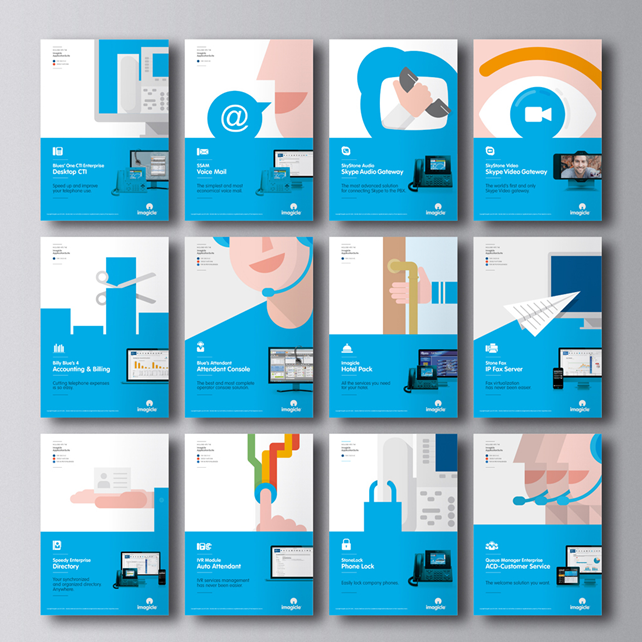 The corporate media strategy was clear from the beginning: a communication developed consistently on paper (all the elements of the stationery, the product guides, the below-the-line), digital (on the web, study of the apps and videos’ interfaces) and 3D (exhibition stands, same interior design for all company offices, etc.). After all, as Charles Eames would say, “the details are not the details; they make the product.”

The daily challenge of communication is to maintain this identity and tone of voice for all the expanding activities we need to tell; editorial graphics and the production of elements such as illustrations, icons and pictograms harmoniously intersect these areas, thus expanding the smiling universe of Imagicle. 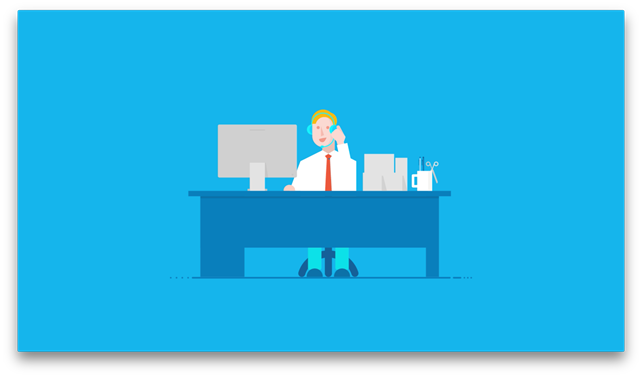 On a final note, I won’t talk about Imagicle’s business strategy; it’s not my field.
But I’m sure of one thing: Imagicle has succeeded in bringing this happiness, this absolutely non-static and conventional approach to work, to the outside. It brought it up to customers, through an image that was nothing but the genuine reflection of the quality of the products and solutions developed with commitment and dedication over the years.

The only way for a communication strategy to work is to be completely honest.
Imagicle’s image is what Imagicle is: unconventional, straightforward, happy. 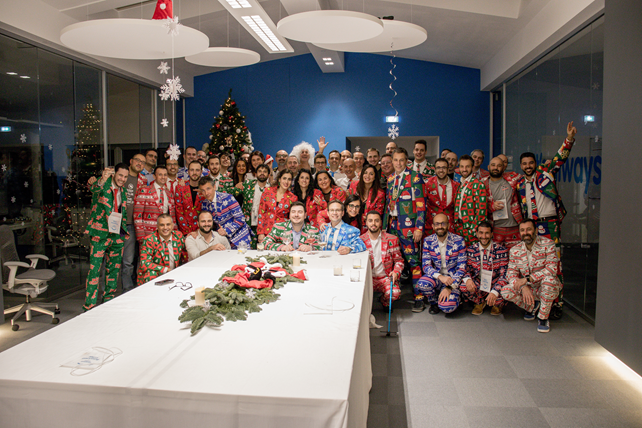 Well, the Middle Eastern sounds still cross this pre-Christmas evening, and together with the champagne, I taste the pleasure of having contributed to this moment – the construction of an increasingly multifaceted story, just like the needs of a company that talks about itself in 6 languages and in more than 150 countries.
Always with a smile.